Trusting God Even When It Doesn’t Make Sense Proverbs 3:5-6

What does the scripture Proverbs 3:5-6 mean?

We’ve all heard the inspirational scripture from Proverbs 3:5-6. It tells us to trust in the Lord with all our heart. But how can we do that when life doesn’t make sense? In this devotion, we’ll read this verse and learn 4 Steps to Trusting God Even When It Doesn’t Make Sense.

But first, let’s read the story of two people who decided to trust God’s plan when it didn’t make sense…

Mary the Mother of Jesus

Imagine being fifteen and pregnant, not knowing what would happen to you.

Could you turn to your parents for support or would you face your future motherhood alone? Would the kids at school still be your friends, or would they give you judgmental stares?

Mary, the mother of Jesus, faced a similar circumstance.

As a betrothed young woman, showing up pregnant was a big no-no. She was under contract to marry Joseph, and a breach of that contract meant she would lose everything.

Instead of judgmental stares from her classmates, she would have been shamed in the public eye.

At best, her husband would leave her, and she would be an outcast for the rest of her life. At worst, she would be stoned.

When Mary turned up pregnant, she faced a very unsure future.

And having come in, the angel said to her, “Rejoice, highly favored one, the Lord is with you; blessed are you among women!”

But when she saw him, she was troubled at his saying, and considered what manner of greeting this was. Then the angel said to her, “Do not be afraid, Mary, for you have found favor with God. And behold, you will conceive in your womb and bring forth a Son, and shall call His name Jesus. He will be great, and will be called the Son of the Highest; and the Lord God will give Him the throne of His father David. And He will reign over the house of Jacob forever, and of His kingdom there will be no end.”

Then Mary said to the angel, “How can this be, since I do not know a man?”

And the angel answered and said to her, “The Holy Spirit will come upon you, and the power of the Highest will overshadow you; therefore, also, that Holy One who is to be born will be called the Son of God.”

“For with God nothing is impossible.” Then Mary said, “Behold the maidservant of the Lord! Let it be to me according to your word.”

Even though it didn’t make any sense how she, a virgin, could conceive and give birth to a child, Mary believed what God’s messenger, Gabriel, told her with an open heart.

In the midst of her dilemma, her faith was unshakeable. She knew she could count on God to see her through because He is always reliable.

She chose to trust God’s plan for her life.

At the same time Mary was facing the news of her pregnancy, her betrothed Joseph also had a choice to make.

He could continue with his marriage to Mary, knowing she was carrying a child that was not his, or he could cancel the marriage contract and leave her in disgrace, alone to face the crowd.

Being a godly man, Joseph chose to end the marriage quietly so Mary’s life wouldn’t be ruined. But God intervened on Mary’s behalf and sent an angel to speak to Joseph.

But after he had considered this, an angel of the Lord appeared to him in a dream and said, “Joseph son of David, do not be afraid to take Mary home as your wife, because what is conceived in her is from the Holy Spirit. She will give birth to a son, and you are to give him the name Jesus,  because he will save his people from their sins.”

It must have been confusing and frightening for Joseph to hear these words.

Because let’s be honest, it’s pretty crazy to think a woman could suddenly be pregnant and still be a virgin, right?

But Joseph believed what the angel said and took Mary as his wife. In doing so, He chose to trust God and to continue on the path God put him on.

Mary and Joseph both trusted God even when it didn’t make sense. They believed God is faithful and His plan would be fulfilled in their lives.

They didn’t understand it all, but they followed God anyway.

Because of their faith, God chose them to play a big part in the promised Messiah coming into this world. And we are all blessed by their decision to trust God.

Read More: All Things Work Together For Good Romans 8:28

How does the story of Mary and Joseph affect our lives?

Because of our faith in His Son, God has chosen us too!

Just like Mary and Joseph, we each have a part to play in God’s amazing plan!

When we think of Mary and Joseph, we tend to put them on a pedestal.

We picture two amazing people, chosen by God to bring about His plan.

The perfect couple, unafraid, and trusting God in all things.

We see them like they appear in the nativity on our table, angelic and holding the baby Jesus in their arms. Halos surround their heads as they gaze into the eyes of the child who would one day die on a cross for our sins. It’s a beautiful picture of grace under fire.

And this is the way we want to see ourselves too. But we know deep down we’re not perfect, we don’t have halos around our heads, and we aren’t always the picture of grace we want to be. So how could God ever use us in His plan?

What does it mean to trust in the Lord with all your heart?

Let’s read this Bible verse from Proverbs 3. It gives us 4 steps to trusting God even when it doesn’t make sense…

Trust in the Lord with all your heart,
And lean not on your own understanding;
In all your ways acknowledge Him,
And He shall direct your paths.

#1 Trust in the Lord with all your heart

God wants our whole heart! Not a tiny little piece of it. So, the first step is simply to trust Him with all your heart.

#2 Lean not on your own understanding

Our understanding isn’t all it’s cracked up to be. Because we see the world as it is right now.

But God sees things differently. He knows our past, our present, and our future. And He puts all of those together to work for our good. Once we realize we don’t know it all and our understanding fails us, that’s when God steps in.

#3 In all your ways acknowledge Him

And God is asking us to understand and acknowledge where everything we have, whether physical, emotional, or spiritual comes from.

#4 He shall direct your path

This is the result of trusting God even when it doesn’t make sense.

God is with us and when we put our trust in Him, He will get us where we need to be according to His perfect plan.

Read More: How to Rejoice in the Lord Always Habakkuk 3:17-19

One day it will all make sense

Maybe you don’t have it all together, I know I don’t. Maybe you don’t understand everything God has in store for you. Or maybe there’s something He’s asked you to do that seems impossible.

You want to follow God, but His plan just doesn’t make sense.

It’s okay if you don’t understand the big picture plan God has for you right now. Step out in faith the way Mary and Joseph did. Chose to trust God to lead you on the path.

Take the first step. He will give the next step, then the next one, and then the next. Eventually, you’ll get to the place He wants you to be. And one day it will all make sense.

My prayer for you is, you will take that first step and allow God to direct your path. All it takes is trusting God even when it doesn’t make sense. 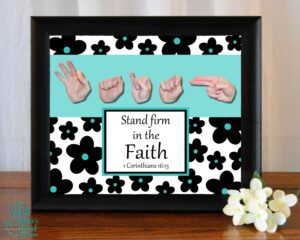 Love One Another Bible Verse Art